The first thing anyone asks me is what side of the road Kenyans drive on.

Well ... I am no expert, but I have covered a few thousand kilometres on my various visits to , so here goes.

Officially, Kenya drives on the left, like the UK, but unlike the UK, this rule has conditions, like which side has the fewest potholes, least traffic, fewest pedestrians, cyclists, other obstructions. That is the side you (or at least, they) drive on. Oncoming traffic is not a consideration. Flash your headlights, sound your horn … and go!

On occasion, where the road is in a very bad state of repair, you may will be overtaken by matatus driving along the verge. Marvel at how they miss the pedestrians.

Traffic lights – these work the same way as in the , when they work at all, the difference being that no one takes any notice of them, even the Police, who may wave you on against a red light.

Note: Arm signals from the police are not the same as in the . For a start, the officer will rarely stand in the middle of the road, he values his life too much. So he will stand on the edge of the road and wave at you. Don’t wave back, just go. If it is raining, the police officer will be hampered by his umbrella, so take extra care. He may not be waving you on, but just clearing excess water from his umbrella.

Whilst on the subject of the police, when driving, you are likely to come across a lot of roadblocks, comprising a hand-written ‘STOP’ sign and then two metal strips with 6” spikes in the road. At night, they may be illuminated – or not.

These roadblocks are manned by several officers carrying AK47 assault rifles and are there to catch drivers without licences, un-roadworthy vehicles, etc. for which an on-the-spot bribe fine is levied. The offender is then allowed to go on his way.

You may find several roadblocks in the space of a couple of kilometres, especially towards the end of the month, just before pay day.

Direction indicators. Where these are fitted to a vehicle and working (which is not always the case), they are used to indicate that the vehicle is about to turn left or right – perfectly normal.

A slow vehicle may use them to indicate that it is/is not safe to overtake it (right indicator = not safe; left indicator = safe to pass). Don’t blindly take the driver’s word for it. He does not know how powerful your vehicle is, or how hard you are willing to gun it.

Rear lights. These are compulsory, which means that about 50% of vehicles have them with at least one bulb working. Matatu, motorcycle and bicycle drivers think they are exempt from having working rear lights, or brake lights, come to think of it.

So if you are thinking about driving at night, a word of advice - don’t!

Motorbikes. These are indestructible and the riders are immortal. They will be driven anywhere on the road to avoid actually having to stop.

Matatus. See motorbikes. Also, expect a matatu to stop in the middle of the road without warning in order to disgorge or pick up passengers. Have patience, the poor guy is only trying to make a living and he doesn’t care if his passengers are mown down when they get out. After all, they have already paid.

The Secret Plan To Freeze The World [?]

If you have been reading or watching any news at all in the last couple weeks you have noticed an unusual weather related trend to the stories. Record cold temperatures, record snow-falls, cold related deaths, frozen crops, severe weather.

This is odd when compared to what half of the climatologists [Ed: what about the other half?] in the world have been predicting for the last ten years, namely global warming. But it begins to make a bizarre sort of sense when you consider it in conjunction with the unexplained light display that occurred in the skies above Norway December of last year.

For days there was speculation as to what caused that bizarre spiral light in the sky, with no official explanation being given. Only after three days did the Russians come forward and claim that an experimental missile had been tested in the area and blew up in flight.

The media may have bought that story, but thinking people, or anybody who has ever seen pictures or video of exploding rockets, have their suspicions.

This facility is ostensibly for atmospheric research, but the United States' own High Frequency Active Auroral Research Program (located in Alaska) has demonstrated that high energy beams shot into the upper atmosphere can literally "punch" holes in the protective layer surrounding the planet. Could such holes dramatically effect weather patterns around the world? Could it be a weather weapon disguised as benign research?

Certain international newspapers have finally picked up the story, demanding that the United States admit to its involvement and cease experimenting with the atmosphere and global weather patterns. Could we actually be on the brink of a new, man-made ice age?

I am, of course talking about my old Mazda BongoWagon, or as I affectionately call her, Zola, the Zola Budd, or the Matatu. 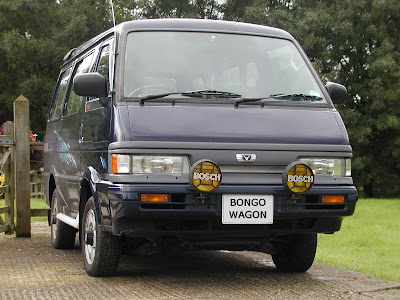 During normal weather (UK normal weather, that is) she leaks rain over my legs, gives me a stiff neck from all the drafts that are let in due to windows not closing properly, she is underpowered and very thirsty.

But in the snow, she is a star! Why? well, in normal mode, she is a normal rear-wheel drive 8-seater people carrier. But, and this is a big but, I can select four-wheel drive at the flick of a lever - on the move if necessary.

The front wheels are then driven as well as the rear wheels, and as the power hits the front wheels, the hubs lock, so for one front wheel to spin, they both have to spin, and with the engine sitting between them, it is unlikely.

OK, so going around a bend on a non-slippery surface is not possible without scrubbing tyres (as both wheels are always spinning at the same speed), but on the slippery stuff, old Zola has dragged me up and down hills and always got me to where I want to go without any fuss, no tantrums, no threats to throw me into the nearest ditch.

But will I remember this when the snow has disappeared, the weather gets warmer and Zola dumps a load of rain on my lap, or will I curse her like I do every Summer?
Posted by BabaMzungu at 15:57 No comments: 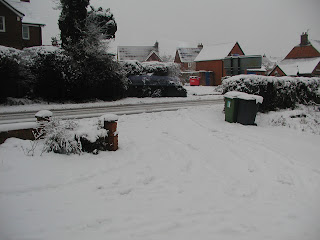 The speed limit in our village is 30 mph (48 k/hr), but we are quite used to vehicles passing through at 50mph, sometimes faster.

But the stupidity of drivers was really shown up today. The road is covered in frozen snow, so is very slippery. There is a major accident at the north end of the village as a result of the snow. But drivers, who have passed the accident, are still passing my house, at the south end of the village, at 40 to 50mph (64 - 80 k/hr).

Do these people think that they are invincible?
Posted by BabaMzungu at 09:59 No comments:

The Crisis of Government

I am not a political pundit. I am just an ordinary person who keeps an eye on what is going on in Westminster, and what the PM and his gang are doing.

So, last week, two former cabinet ministers mounted a coup to try to oust James Gordon brown from the office of Prime Minister, but had so little open support that they ended up with egg on their faces.

The dust hadn't even settled when a former General Secretary of the Labour party, Peter Watts published his autobiography, which is serialised in a major Sunday newspaper, and what is being divulged is shocking. If it can be believed, not only is the PM not well loved by the electorate, but he is disliked by the people he works with, his Government!

But Gordon has issued a statement to say that he is determined to remain in office, and if labour win the election later this year, he will serve another full term as Prime Minister.

Power for the sake of power, or does he still believe that he is the saviour of the country and the world? 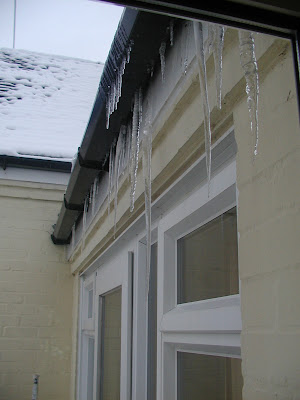 Posted by BabaMzungu at 09:51 No comments: