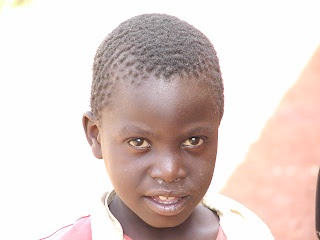 On my last trip to Kenya in May of this year, I came across a few deaf people. Not surprising really as the first school for the deaf run by the deaf is situated in Kisii.

On my last day in Kisii, I met a deaf child, Simon, who was 8 years old. He was accompanied by a friend, Brian, who signed for Simon. Both children seemed proficient in sign language, as is my co-director, Vincent.

At the time, I was actually in the process of packing to leave Kisii so I did not get to know more of the circumstances of Simon and Brian. A lot of thoughts were running through my mind. Were they street children? They were certainly very grubby, even by the standards of rural Kenyan children. Did either or both of them go to school? Who looked after them? Did they have families? Etc.

When I returned to the UK, I asked Vincent to find out a little more, which was not difficult as Simon visited Vincent regularly, asking for money.

Anyway, it turns out that Simon does not go to school, despite the fact that there is a good school for the deaf in Kisii. He stays at home with his mother. Why?

Brian does go to school and also lives with his mother.

Neither child mentioned anything about fathers. Are they half-orphans?

So, as well as trying to learn a few words of Swahili and maybe a couple of words of Ekegusii (the local language of the Kisii area), I now want to learn sign language. And this poses another problem.

I cannot just go to the local college in England to learn it. In Kenya, they use Kenyan Sign Language - naturally. There are schools for the deaf that use British Sign Language or even American Sign Language, but KSL is the offocial language in Kenya.

I have searched the Internet and found a couple of useful sites that give a few words in KSL, but nowhere can I find a site that goes into any depth. So I guess that Vincent is going to have to teach me. I am sure it will come in useful while I am in Kenya.