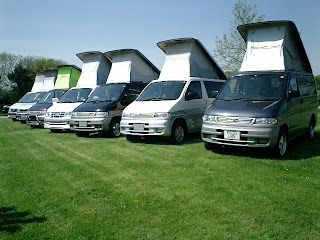 I have just left a client who has decided to let me design a website to sell his wares - Bongos.

No, not a form of drum struck with the fingers and palms, but a rather adaptable Mazda vehicle imported from Japan.

It's going to be a fun project - I hope, with lots of updates as stock moves.

Having followed the Rhino Ark fund-raising antics of a bunch of 4x4 enthusiasts dashing through the Kenyan bush for several years (as the webmaster for said organisation), I keep promising myself that I will arrange to be in Kenya when the event is on, this year it is 31st May.

Somehow, though, I doubt that I will be. I haven't even been able to attend the somewhat tamer UK version in Pippingford Park! 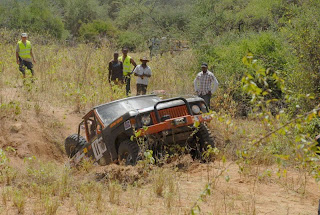 Rhino Ark supporters hold four main off-road events each year, The Hog Charge, which has just passed, The Quattro, which is organised by one of the regular entrants to the Rhino Charge and the UK Rhino Charge.

With the exception of the Hog Charge, which is kids on bikes getting very dirty, the events are for serious off-road vehicles - you wouldn't get far in a Vitara!

Being a frustrated 4x4 enthusiast (frustrated because although I have the potential use of a 4x4 vehicle, it won't run!), I would love to attend these events. And it would give me an outlet for my other passion - photography. Of course, I could always use the excuse that my attendance was as the webmaster taking photos for the website, but as I always receive loads of photos after each event, that would be a bit lame.

Anyway, when I get back out to Kenya, I think I will have enough to do with our KCIS projects without disappearing off to some sun-baked corner of the Rift Valley or wherever to watch a lot of lunatics trying to go where vehicles were never intended to, just to get from point A to point B (then C, D, E, etc.) in the shortest distance and time.

Why is it that, when I decide to update or upgrade one of my websites, a client sends through a whole ream of updates for their site? And then another lot before I have finished the first lot?

And, when I have finished all these updates for my clients, I am all washed up and have lost any idea of creativity?

Over the weekend, I have received the report and photos for the annual Rhino Ark Children's Event, The Hog Charge. This is a Kenyan cross-country event where a horde of children cycle an all-terrain track in teams and the muddiest one wins - er, no. I think it is the fastest team and also the team who has raised the most sponsorship money (for Rhino Ark) that wins.

I have to say that if you can judge how much fun a child has had by how dirty he or she has got, then these kids had one heck of a time.

This update was quickly followed by the announcement that Rhino Ark, in the form of Rhino Charge UK will be represented at the Total Off-Road & Planet 4x4 at Donington Exhibition Centre on 22nd February. This update/announcement was, of course, urgent.

Then I get the problem that people in Kenya checking the site don't have fast connection and sometimes photos don't download, or their cache is open and they don't se updated pages, so I have to check to make sure that everything is in order. I now check all work on two PCs and a Macintosh ~ belt and braces!

Then, of course, before all this is ironed out, I get updates for another client site ~ then another, they arrive just like red double-deckers, in convoy.

Oh well, it's all good fun and it buys a crust of bread.

Posted by BabaMzungu at 17:55 No comments: