Well, this new slide show shows that they don't just work. We organise games for them so that, especially those with particularly hard lives can act like the kids they really are, even if it is only for a couple of hours!

Please take a look at a bunch of kids enjoying themselves.

Posted by BabaMzungu at 20:22 No comments:

A Plea From Ghana

My name is Blessing Akowuah. I am 15 years old and I live in Ghana with my parents and sister.

If I do not go to school, I will not be able to become a good worker when I finish school. I want to be able to work well for my family and for Ghana.

Please, I need a sponsor. I am clever and I am worth helping so that I can get a good job.

Posted by BabaMzungu at 09:50 No comments:

Review of My Time in Kisii

This is not a long review, just memories of little incidents as they come to me.

This first relates not just to my latest visit, but I will relate the last occasion that I found this funny.

Now, I am sure that many of you have seen this simple finger trick:

I don't know when or where I first picked it up, but I seem to have been able to do it forever.

Anyway, when confronted with a gaggle of rural Kenyan kids, this is what I show them, particularly one little boy, Simon, who is deaf, and his friend and signer, Brian. Simon is the one with his finger in his mouth.

Both kids were amazed and tried for a long time to do this and eventually, with a little help, they succeeded. 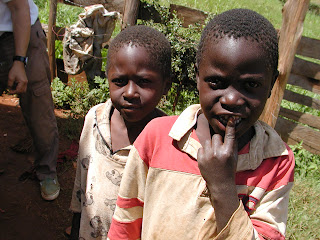 The sounds of pleasure that Simon made when he succeeded were special. He had a grin on his face as he "talked" to Brian and Vincent, who can also sign.

Maybe I should learn to sign as well. I am sure that Simon isn't the only deaf kid who will cross my path in Kenya.

But is signing in Kenya the same as over here in the UK? I don't know. Can anyone tell me, please?

There is a school for the deaf, staffed by deaf people in Kisii. It is the only one of its kind in Kenya a far as I can make out. Did Simon go there? I doubt it. He and his friend Brian were two of the scruffiest, grubbiest kids I have seen in Kenya.

I have finally managed to transfer the video from my old video camera onto my PC hard disk, edited it and produced a short film of the Twiga kids working the vegetable plot.

You can see it here
Posted by BabaMzungu at 09:52 No comments:

During my recent visit to Kisii, I took a lot of photos, the Twiga kids used my camera to take even more (some of them are rather good), and we also shot some candid video, using my old, creaky 8mm camcorder.

Back at home, I now have the endless task of weeding out the photos and editing the video.

Which posed a problem - how do I transfer analog video on tape to a digital format on a hard disk?

And the answer came from an unexpected corner. I was glancing through the adverts in last week's Sunday paper when i spotted a "USB video grabber". It was expensive, but i had a look on eBay and there was the same gadget, but a lot cheaper.

The gadget arrived and I set about installing it on my most powerful computer, which runs under Windows XP X64 (I inherited it so I didn't get a say in the operating system). And guess what, it is not compatible - most hardware isn't compatible with X64.

So to the second most powerful computer, which I build myself from stuff lying around.

For the technically minded, it has an early Pentium-D 2.8GHz and 2GB RAM, 3 x 250GB SATA hard disks, but a very poor internal video card (16MB) and no video card slot.

It installed perfectly on this second machine, so I connected everything together and wow! I could see my video on-screen. I can capture a video or bits of it, edit it with the software provided, and generally mess about with them - brilliant.

Now all I have to do is to figure out what all the buttons and commands do - the manual is, as usual, not terribly good, so this could take some time.

There is also the question of resolution. Obviously, I want the biggest possible screen-size, but there seems to be a problem and I have chosen a smaller format for the time being. I can always recapture the videos, and probably do a better job next time.

Posted by BabaMzungu at 13:31 No comments: